Presidents Without Parties: The Politics of Economic Reform in Argentina and Venezuela in the 1990s Javier Corrales 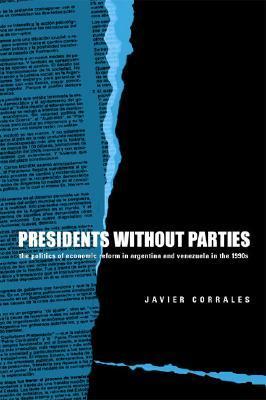 Deep economic transformations require cooperation from the ruling party. This support allows the state to sustain societal support and simultaneously ward off the potentially paralyzing influence of interest groups. Without such cooperation, the executive loses credibility and the political fortitude necessary to neutralize the opposition from skeptical as well as cost-bearing sectors of society. Presidents Without Parties puts this argument to the test by examining closely what happened in Argentina and Venezuela during the 1990s.Similarly situated when they embarked on economic reform in 1989, Argentina experienced success, with the reformers reelected in 1995, whereas Venezuela saw its reformers efforts fail, leading to a prolonged crisis.

Corrales shows precisely how the executive s relationship with the ruling party shaped the different outcomes in the two countries. He then applies this argument to eight other cases of market reform in Latin American countries in the 1990s.This book resuscitates and refines the ancient but often forgotten argument that political parties are indispensable for governability. In an era in which it is trendy to discount the usefulness of parties and to celebrate extrapartisan institutions, Corrales offers a reconsideration of the costs of trying to govern in the absence of competitive parties.

Comments
Comments for "Presidents Without Parties: The Politics of Economic Reform in Argentina and Venezuela in the 1990s":